The Battle For Kyiv: Russia's Invasion of Ukraine Day 2 – The Debrief

Intense fighting continues to rage along large portions of Ukraine following the first twenty-four hours after Russian President Vladimir Putin announced the start of a “special military operation” against Russia’s eastern neighbor.
Russia’s attack on Ukraine began in the early hours of February 24 with a salvo of airstrikes on at least 25 Ukrainian cities, including Kyiv, Kharkiv, Kramatorsk, Dnipro, Mariupol, Odesa, and Zaporizhzhya.
According to the U.S. Department of Defense (DoD), Russia’s initial barrage consisted of approximately 100 intermediate-and-short range cruise missiles launched from land, sea, and airborne platforms. The DoD says roughly 75 heavy and medium bomber aircraft were also used in the assault. Targets were said to be military bases and air defense systems.
Shortly after the initial aerial bombardments, Russian armor and ground troops began to advance into Ukraine along three axes of attack, from four primary thrusts. Russian troops were reported crossing the border from Crimea in the south towards Kherson, along the western Donbas region, from the north towards Kharkiv, and from the Belarusian border towards Kyiv.
Speaking on background, a senior U.S.U.S. defense official said Russia’s avenues of advance were “clearly designed to take key population centers.”
By the end of the day, the United Kingdom’s Ministry of Defense reported that it was “unlikely that Russia has achieved its planned Day 1 military objectives,” praising Ukrainian forces for its “fierce resistance.”
Pentagon and White House officials were more tempered in their day-one assessment, pointing out things were still in the early stages of Russia’s planned invasion. Adding that the bulk of 150k – 200k troops Russia has staged on Ukraine’s borders had not yet been committed to the battle.
“It’s our assessment that [Russian forces] have every intention of basically decapitating the government and installing their own method of governance,” said a senior DoD official.
Anton Herashchenko, an adviser to Ukraine’s Interior Minister, said today (February 25) will be the war’s “hardest day.” 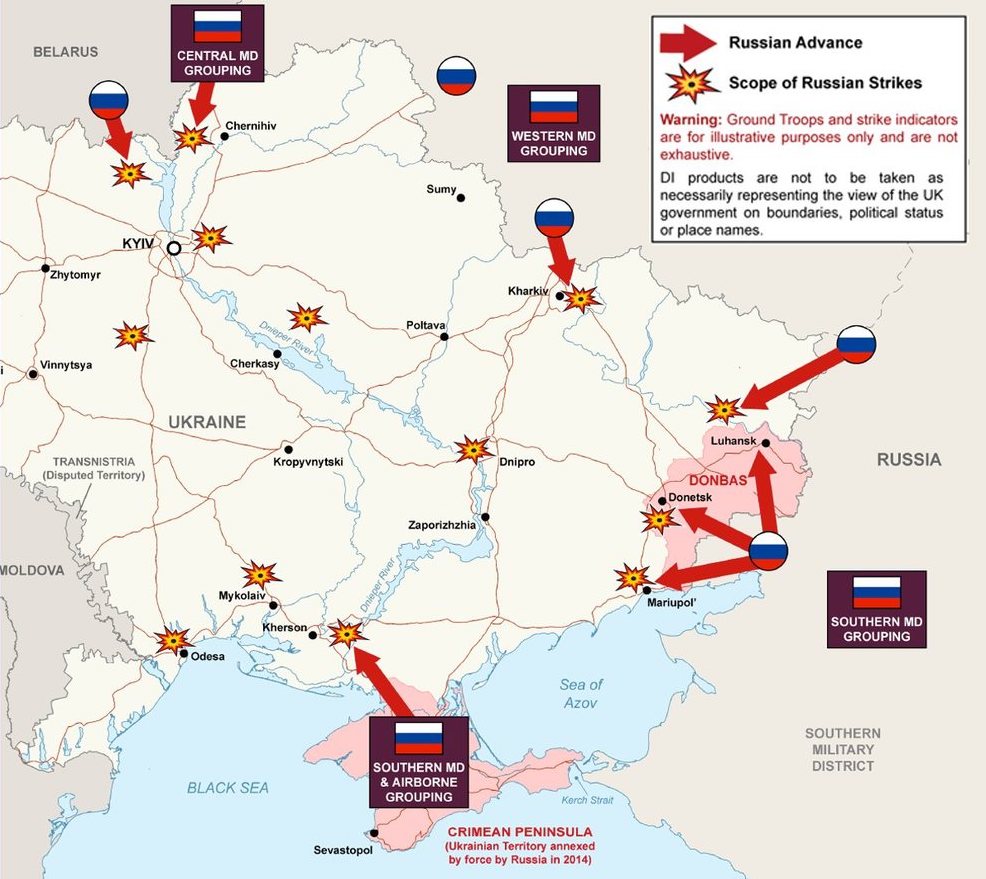 Indications on the ground suggest the largely overmatched and outnumbered Ukrainian defense forces have put up an admirable defense during the invasion’s early stages, particularly in the eastern and northeastern regions and around Ukraine’s second-largest city Kharkiv.
British Defense Secretary Ben Wallace told Sky News that Russia had lost “more than 450 personnel” in the first 24 hours of the invasion. Ukrainian Deputy Minister of Defense Anna Malar claimed defense forces had shot down 7 Russian aircraft, 6 helicopters, more than 30 tanks, and over 130 armored military vehicles. Malar also said that over 800 Russian troops had been killed.
Images circulating on social media showed dozens of abandoned or burned-out Russian tanks and armored vehicles from the fighting areas around Kharkiv and in the southern Kherson region. Other videos depicted what appeared to be a downed Russian aircraft and two, possibly three, different crashed Ka-52 attack helicopters.
Additional graphic images showing dead Russian soldiers filtered through Telegram chat groups and private Discord servers.
So far, the Russian Ministry of Defense has failed to comment on casualty numbers, and The Debrief is unable to independently verify any of the claimed losses of Russian troops or equipment.
Throughout the day on Thursday, Ukraine’s Ministry of Defense also began publishing images and videos of alleged Russian soldiers who had been taken as prisoners of war. In one video, a Russian soldier purportedly from the 74th Motorized Rifle Brigade claimed his unit was only in Ukraine to collect information and not fight.
In one of the more dramatic events of the day, Russia launched a bold airborne assault on Hostomel Airport, located roughly 15 miles northeast of the center of Kyiv.
Coming in by helicopter, reportedly 150-200 Russian troops landed in an attempt to seize the airport, which is owned by the Antonov Aircraft manufacturing company. CNN reporter Matthew Chance, who was on the scene, confirmed that Russian forces initially captured the airport.
“We didn’t even know that Russian forces were going to be here. We assumed these were the Ukrainian forces… it only emerged during the conversation that they were all Russian, and there were no Ukrainian military forces in sight,” said Chance, in a surreal scene, with Russian soldiers a mere 20 feet behind him.

Ukrainian forces launched a series of fierce counterattacks, and by the early morning hours on Friday, Ukraine’s General Staff confirmed that Hostomel airport was back in Ukrainian control.
Beginning in the late morning of February 25, conflicting reports have suggested that a column of Russian armored vehicles are making their way towards Hostomel in an attempt to retake the airfield. Comments attributed to Ukraine’s General Staff have likewise suggested the airport has been destroyed to prevent use by the enemy. The Debrief cannot yet independently verify either of these claims.
The Kremlin likely sees Hostomel as a high-value strategic target, as seizing control of the airport would give Russia a bridgehead for the airborne supply of troops and equipment on the outskirts of Kyiv.
An adviser to the Ukrainian presidential office, Mykhailo Podolyak, confirmed that Russian forces had captured the Chernobyl nuclear power plant in northern Ukraine after brutal fighting. The site is home to the 1986 Chernobyl disaster, where clouds of radioactive material were scattered across much of Europe following a botched safety test on one of the nuclear reactors.
Sitting less than 10 miles from Ukraine’s border with Belarus, defense analysts say seizing Chernobyl was likely a strategic goal for Russia because it lies directly along the path of forces attacking Kyiv from the north.

Overnight, numerous airstrikes were carried out on Ukraine’s capital city of Kyiv.
“Horrific Russian rocket strikes on Kyiv. Last time our capital experienced anything like this was in 1941 when it was attacked by Nazi Germany,” said Ukraine’s foreign minister Dmytro Kuleba.
Images of a badly damaged apartment complex in Kyiv emerged Friday morning. Kyiv mayor Vitaly Klitschko said several civilians were injured after a Russian missile struck the residential building.
Ukrainian President Volodymyr Zelenskiy said Russian forces were purposefully targeting civilian areas in a video address. “They say that civilian objects are not a target for them. But this is another lie of theirs. In reality, they do not distinguish between areas in which they operate,” said Zelenskiy.
By early Friday morning, reports began coming in that Russian ground forces were now entering Kyiv, Ukraine’s capital and home to nearly 3 million people.
At around 10:00 a.m. local time, the Ukrainian Defense Ministry reported Russian forces were starting to attack the central Kyiv suburb Obolon. Shortly after the announcement, Ukrainian officials warned that Russian troops, dressed in Ukrainian military uniforms, had seized two Ukrainian armored vehicles and were making their way toward the center of Kyiv.

An hour after making the announcement, Ukrainian officials said the “Russian saboteurs” dressed as Ukrainian troops had been “eliminated.” Images posted on social media claiming to depict the event’s outcome showed a badly damaged military vehicle, with bodies of several fatigue-clad persons lying nearby.
The Kyiv Post reported sounds of explosions and small-arms fire in the northern district of Kyiv and in the central suburb of Obolon. Around 11:00 a.m., war reporter and former U.S.U.S. Air Force special operations pilot Nolan Peterson, currently in Kyiv, tweeted, “Gunfire in central Kyiv. Very tense moments. Russians are in the city.”
Two videos posted to social media Friday morning, taken from different angles, showed an armored military vehicle appearing to intentionally veer off and run over a passing civilian car on the streets of Kyiv. It’s unclear from the video if it was a Russian or Ukrainian armored vehicle or if the scene was related to the earlier reports of Russian saboteurs.
Російська бронетехніка навмисне переїхала українця в машині, але він вижив pic.twitter.com/vwNmWOUArt
— Українська правда ✌️ (@ukrpravda_news) February 25, 2022

By early Friday afternoon, the Russian attacks on Kyiv appeared largely uncoordinated and without any consistent line of contact. Defense officials, however, expect the siege to significantly intensify, with the seizure of the Ukrainian capital being Russia’s number one goal in the overall offensive.
Reports from the U.S. Intelligence Community say Russia intends to seize Kyiv, take custody, or kill high-ranking Ukrainian officials, and establish a pro-Kremlin regime.

13 Ukrainian border guards stationed on Snake Island, a 40-acre island roughly 70 miles south of Odesa, died after refusing to surrender to a Russian Navy warship in a tragically stoic incident.
In an audio recording that purportedly captured the event, a voice can be heard in Russian saying, “This is a military warship. This is a Russian military warship. I suggest you lay down your weapons and surrender to avoid bloodshed and needless casualties. Otherwise, you will be bombed.”
After a brief pause, there is an exchange in Ukrainian – “should I tell them to go fuck themselves?” – before finally responding, “Go fuck yourself.”
The audio recording was first obtained by Ukrainian news outlet Ukrayinska Pravda and confirmed authentic by Ukraine’s interior ministry.
According to Maritime Executive, the Russian Navy warships Moskva and Vasily Bykov bombarded the island with deck guns before sending Russian soldiers ashore to take control of the island. All 13 border guards are said to have been killed.
President Zelensky said all of the guards would be posthumously awarded Hero of Ukraine medals in a video address.
Follow and connect with author Tim McMillan on Twitter: @LtTimMcMillan or encrypted email: LtTimMcMillan@protonmail.com


We are using cookies to give you the best experience on our website.
You can find out more about which cookies we are using or switch them off in settings.
This website uses cookies so that we can provide you with the best user experience possible. Cookie information is stored in your browser and performs functions such as recognising you when you return to our website and helping our team to understand which sections of the website you find most interesting and useful.
Strictly Necessary Cookie should be enabled at all times so that we can save your preferences for cookie settings.
If you disable this cookie, we will not be able to save your preferences. This means that every time you visit this website you will need to enable or disable cookies again.

Bellscord is a Gaming Community which hosts its own Minecraft Server and Discord Community. Bellscord Communities can be found across multiple platforms. Our aim is to build a big and active community.

How to spawn a blue axolotl in Minecraft Bedrock Edition – Sportskeeda

By subscribing you agree to receive news and updates from Bellscord.